The Proustian pastiches competition of 2020 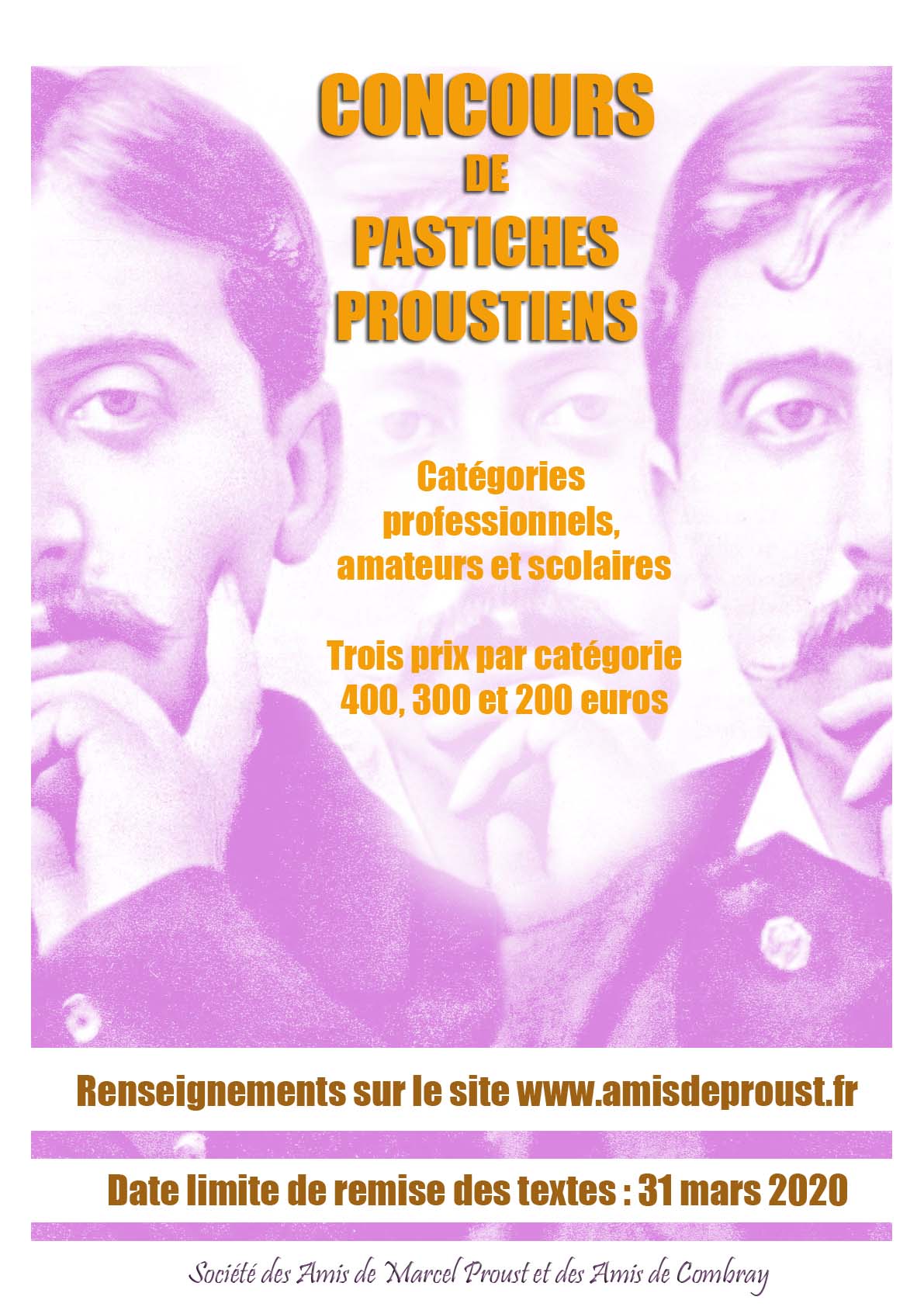 Marcel Proust often played the game of literary pastiche*, notably in 1908-1909, in a series of articles alluding to the same news item, L’Affaire Lemoine. These pastiches were collected in 1919, along with other articles, in a volume entitled Pastiches et Mélanges. Le Temps retrouvé, the last volume of A la recherche du temps perdu, also contains a famous pastiche of the Goncourt brothers’ Journal. Proust’s style has itself often been the target of pastiches, for example by André Maurois (Le côté de Chelsea) or by Jean-Louis Curtis (La Chine m’inquiète ; La France m’épuise).

*Here is what Proust wrote in Against Sainte-Beuve to explain his interest in pastiche : « As soon as I was reading an author, I could very soon make out the melody of the song underneath the words, different in one author from what it is in every other, and as I read, without realizing it, I would be humming it, hurrying the words, slowing them down or breaking off altogether, as one does when singing, when, depending on the tempo of the melody, one often waits a long time before saying the end of a word. » Against Sainte-Beuve and other essay,  Penguin Books, 1994 (Translation by John Sturrock).

The competition is open to three categories : professional, amateur, and  scholastic.

The professional category is open to all persons having already published a literary work (self-publications excluded);

The amateur category is open to all persons having never published a literary work (self-publications excluded);

The scholastic category is open to all  classes from public or private secondary schools. Entries must be submitted collectively in the name of the class.

For each competitor, only one text will be taken into consideration, whatever the chosen categories; if a competitor were to submit several pastiches, only the one submitted last would be taken into account.

The following rules apply to the text :

The text must also abide by the following rules:

Participation requires the submissal of a full application, including :

Applications are now over.

Upon completion of the application, each participant will receive a confirmation email.
By enrolling into the competition, participants warrant organizers and members of the jury against all possible disputes by third parties on the originality of submitted pastiches.
All incomplete, non compliant, or late submissals will be rejected.
Submissals will be accepted until  Tuesday March 31st 2020, midnight, Paris time.

A jury constituted mainly of board members of the Société des Amis de Marcel Proust will meet to attribute three prizes in each category. The jury will however reserve the right to leave some prizes unattributed, for example in the event of a insufficient number of applications.
Jury members will be guided in their selection by common criteria: resemblance with Proust's style, originality, emotions conveyed, proper spelling and grammar, use of the word Guermantes.

In each category, winners will receive:

Furthermore, the winning pastiches will be published on the Société des Amis de Marcel Proust’s website and may also be printed.

Resultat will be announced Saturday May 16th 2020.

Prizes will not be redeemable under a different form than the one devised in the herein rules. Organizers reserve the right to modify the nature and the value of prizes, in case of necessity.

The competition rules are available by clicking on this link.

Any question pertaining to the Proustian pastiches competition of 2020 should be sent to This email address is being protected from spambots. You need JavaScript enabled to view it. .

Suivez-nous :
template-joomspirit.com
Back to top